Fairy tales, folktales, literature, dreams, and art can all provide us with meaning.

This goes beyond just taking delight in these works. Rather, they can teach us about key aspects of our human development.

The unconscious motivates much of our behavior. In order to become our full selves, we need to integrate the unconscious and the conscious. Stories such as folktales offer paths to that understanding.

These stories are filled with archetypal images. And by engaging with these materials, we can open up a dialogue with the unconscious.

We can learn to see how the things that we are going through are part of a bigger story. For example, an American Indian folktale called “The Island of Skeletons” can be of great help specifically to men who are on a journey of self-development.

Before we dig into the fairy tale, let’s talk about a few key concepts. Notably, individuation is uniting the conscious and unconscious. It is a multi-step process. Two important parts are working with the shadow and the anima.

The first step is to become aware of our shadow. The shadow is the part of our personality that we reject. Sometimes we project it onto other people in our lives. It also shows up in our dreams. A major part of the individuation journey is learning to accept and even love the shadow as an important part of ourselves.

Every person has an aspect to their psyche related to the opposite sex. In men, this is called the anima. The anima is the personification of the feminine principle in man. Through individuation the anima leads men to a fuller understanding of relationship and serves as a guide into the collective unconscious..

There may be aspects of a man’s femininity that he rejects. This impacts his relationships. In order to improve his relationship with himself and others, a man must get to know his anima. He must be curious about it, befriend it, and accept it as part of himself. It is part of the process of becoming a man.

“The Island of Skeletons” – An American Indian Folktale with Deep Meaning

Keeping the aforementioned concepts in mind can help us when looking at this folktale.

Summary of the Story 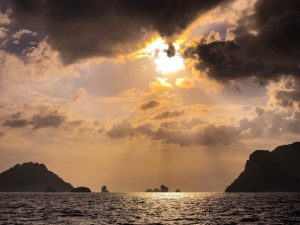 Red Shell and his sister Wild Sage were rescued by their uncle Big Wave after a plague. At first, they are protected in a great forest. However, Wild Sage is kidnapped by a giant and taken to the Island of Skeletons.

Red Shell continues to live a protected life in the forest. Big Wave warns him never to cross the magic line that keeps him protected. For a while, he is happy to listen. However, one day, a man approaches Red Shell with the promise of hunting beautiful birds. The idea seduces Red Shell, and he follows the man.

The man takes him to a cave on a rocky island in the center of a big lake. Red Shell eats a little bit of the man’s food and stays the night.

Then he goes on to the Island of Skeletons. Once there, Red Shell conquers the giant and rescues his sister. Furthermore, the people whose bones were scattered all over the land all come back to life.

Symbolism in the Folktale

We can look at the symbolism in this folktale with an eye towards understanding the process of individuation.

At first, Red Shell lives in a forest. The forest is both a place of safety and a place where you can get lost. In this way, it is symbolic of the unconscious. It is no coincidence that Red Shell starts out here. You’ll find that in many folktales, the main character begins in an unconscious state.

Red Shell follows a man out of the safety of the forest. This man is his shadow. Think about how scary and dangerous it is to be with a stranger in a cave at the center of a big body of water. Getting to know your shadow is scary business. However, by befriending it, Red Shell can move forward.

Wild Sage is Red Shell’s sister in the story. However, she actually represents his anima, or feminine side. When Red Shell was living comfortably in the forest, he didn’t seem to miss her. He was unconscious of her.

However, he eventually came into awareness. Then he went and saved her. He united the male and female aspects of himself.

Working with Folktales in Therapy

We can use folktales like this one to better understand our own current struggles.

For example, a man in disagreement with his wife might find new insight when using this fairy tale as a lens. He might be able to see that he has disowned his own shadow parts. Healing them could reduce some of the conflict.

Furthermore, he might think he has a problem with his wife’s actions. However, through therapy, he may come to realize this is actually related to his own anima. Recognizing that all men go through journeys like this one, he can see the bigger picture. This opens up new doors for his own individuation.

The type of work described in this post is one aspect of depth psychology. I would like to invite you to learn more about how this type of therapy can help in your own life.